raku pottery of Bose Bose
a plate removed from the kiln 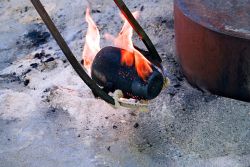 raku pottery of Bose
...removed from the hot kiln with long pliers...

The Japanese term raku, which means “joy”, is derived from the site from which clay was dug in Kyoto in the late sixteenth century. For fifteen generations, it has been the title and seal used by a lineage of potters whose work formed the central tradition in Japan.

Raku is considered the traditional method for creating bowls for the Japanese tea cerimony. The artistic theoretical background which lies behind the beauty of Raku is the philosophical thinking of Zen Buddhism.

Raku is a form of pottery characterized by low firing temperatures (resulting in a fairly porous body), lead glazes, and the removal of pieces from the kiln while still glowing hot.

Raku wares are hand-made, each with a unique shape and style. They are made from a stoneware clay body, bisque fired at 900° C, glaze fired at about 1000° C in special kilns. Pieces are removed from the hot kiln with long pliers, placed in masses of combustible material (e.g., straw, or sawdust), and covered in order to provide a reducing chamber for the glaze, and to stain the exposed body surface with carbon.

This process is known for its unpredictability, and for the effects which obtains: the glaze recipe “crackle” or craze, presenting a cracked, old-fashioned appearance (the so-called “craquelé”).